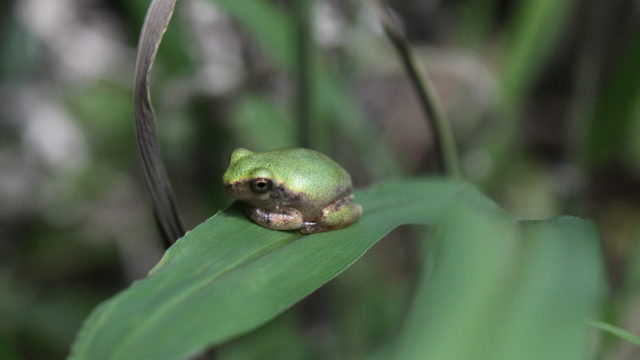 What is an amphibian? Amphibians are animals that live partly in water and partly on land. Frogs, toads, newts, and salamanders are all amphibians. They are often confused with reptiles, which have dry and scaly skin, but amphibians have soft, moist skin.

Read more to learn about ten different species of amphibians you can find in national parks.

Species of leopard frogs (Lithobates) can be found in Canada down through South America. While there may be a lot of species and varied patterning between individuals, they all have a similar coloration: brown or green spots that form a “leopard” pattern.

The gray treefrog (Dryophytes versicolor) is a species of small tree frog native to much of the eastern United States and southeastern Canada. #FunFact: As its scientific name suggests, gray treefrogs can camouflage themselves depending on which substrate they are sitting on.

If you live near a forest on the East Coast, beware the red eft salamander! They contain a poison called tetrodotoxin. You can’t get poisoned by touching this small amphibian, but if you eat it, you’re in for a world of trouble.

Marbled Salamanders (Ambystoma opacum) are nocturnal amphibians that burrow under logs daily. They can be found throughout the Southeast U.S., except in southeastern Georgia, peninsular Florida, and the higher elevations of the Appalachian Mountains.

The squirrel treefrog (Hyla squirella) is a small species of tree frog found in the southeastern United States, from Texas to Virginia. #FunFact: In the areas where squirrel treefrogs are common, they are called “rain frogs” since their call can often be heard during and after rain showers.

The canyon tree frog (Dryophytes arenicolor) is a species of tree frog native to the rocky plateau areas of the Southern United States, like Utah or New Mexico. Their colors can vary a lot but usually match the soil or rock coloration of their native habitats to serve as camouflage.

Found primarily in the Pacific Northwest, the long-toed salamander (Ambystoma macrodactyl) hibernates during the harsh, cold winter months. They can be easily recognized by the yellow stripe running across their backs (and their long toes!)

Woodhouse’s toad (Anaxyrus woodhousii) is a medium true toad native to the middle parts of the United States and Mexico. #FunFact: This toad species was first described in 1854 by the French herpetologist Charles Frédéric Girard. He gave it the name Bufo woodhousii in honor of the American physician and naturalist Samuel Washington Woodhouse.

Visit amphibians.org/amphibianweek/ to find out more about #AmphibianWeek and ways you can get involved.