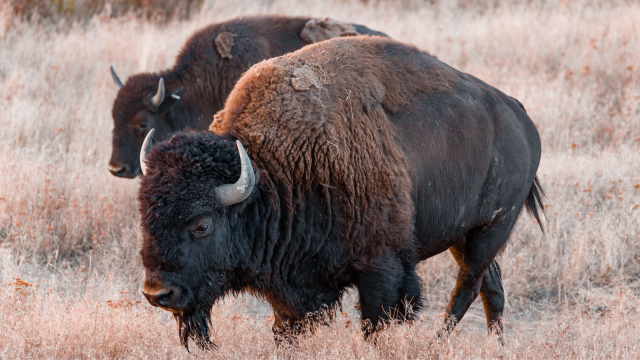 November 6th is National Bison Day! This day celebrates the American bison (Bison bison), commonly known as bison or buffalo. This massive migrating species once traveled the grasslands of North America in extensive herds. It is estimated that 30 to 60 million bison may have roamed North America before the mid-1800s. Modern-day bison herds are found roaming freely in national parks and preserves.

Keep scrolling to learn all the American bison:

The average weight range for buffalo is between 701 to 2,205 pounds, but the heaviest bison ever measured weighed more than 3,800 pounds!

2. A wild bison’s lifespan is about 25 years

While wild bison usually live to 25 years of age, bison in captivity may live longer. The oldest bison ever recorded was a bull (male) who was 30 years old at San Francisco’s Golden Gate Park.

3. Bison can run faster than horses

Despite their massive size, bison are pretty athletic! They can run at speeds approaching 35 miles per hour and can jump over 6 feet.

Although both males and females grow horns, their horns can be helpful when telling them apart. On a cow (female), the horn will be more C-shaped and slender when compared to a bull’s. Above is a female bison with her calf.

5. Bison can “plow snow” with their heads

When the snowfall gets to be too much, bison will move snow with their heads to make traveling and grazing easier. This behavior can be seen often at Yellowstone National Park!

6. Baby bison are an orange-red color until they are a few months old

Cows begin breeding at the age of 2 and can only have one calf at a time. Don’t let the word “baby” fool you; bison calves weigh up to 70 pounds at birth!

7. Yellowstone National Park (ID, MT, & WY) is the only place in North America where bison have continuously lived since prehistoric times.

The largest bison herd in the country on public land resides in Yellowstone, where the population fluctuates from 2,300 individuals to over 5,500 individuals. The above map shows the seasonal distribution of Yellowstone bison in comparison with the Interagency Bison Management Plan management areas.

Even though buffalo have poor eyesight, they have great senses of hearing. Cows and calves communicate using pig-like grunts, and during mating season, bulls can be heard bellowing across long distances.

9. The American bison is the official mammal of the United States.

10. The National Park Trust’s lovable mascot is a bison!

Representing our Youth and Family Programs, our woolly mascot, Buddy Bison, encourages kids across the country to “explore outdoors, the parks are yours!”

Photos for this article come from Getty Images, Canva Multimedia, and the National Park Service.