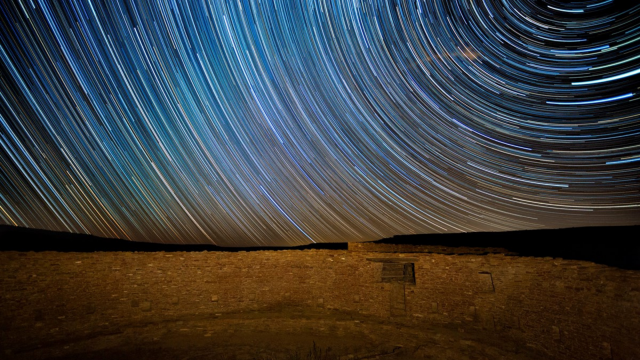 National parks are often found in some of the most remote areas of the United States and protect from light pollution that preserves the quality of the night sky.

Chaco has long been considered by many night sky enthusiasts to be one of the best places in America to stargaze. Today, amidst this ancient landscape, visitors can experience the same dark sky that the Chacoans observed a thousand years ago. The protection of dark night skies is a priority at Chaco not only for the enjoyment of star-gazing visitors but for the natural environment as well. Nocturnal wildlife relies on darkness for survival, and the natural rhythms of humans and plants depend on an unaltered night sky. By designating over 99% of the park as a “natural darkness zone”, in which no permanent outdoor lighting exists, Chaco is ensuring the preservation of these nocturnal ecosystems.

Big Bend is known as one of the most outstanding places in North America for stargazing. It has the least light pollution of any other National Park unit in the lower 48 states. Realistically one can see approximately 2000 stars on a clear night here compared to perhaps a few hundred in a medium-sized city. Recently, Big Bend National Park has begun the process of eliminating all forms of light pollution to help visitors experience night sky free from modern intrusion.

Salinas Pueblo Missions National Monument is a 1,077-acre historic site in central New Mexico. Although the Park is within the outer light dome of the Albuquerque metropolitan area, its Silver-tier skies are an increasing draw for visitors who hear of interpretive programs about how the current night sky differs from what the natives saw before the Spanish conquest. On September 30, 2016, the new Superintendent of Salinas Pueblo Missions National Monument, Tom Betts, proudly announced their new designation as a Dark Sky Park.

Obed Wild and Scenic River is the second park east of Colorado to earn the status of an International Dark Sky Park. The park preserves natural nighttime darkness over one of the last free-flowing wild river systems in the eastern United States. Obed’s exceptional dark-sky conditions and a strong commitment to preserving the park’s night sky resource makes this one of the best places to stargaze!

Imagine sitting at the campground after a long day of hiking and gazing up at the sky. The sky that you would be looking at is about as dark as it was 800 years ago for the ancestral Pueblos who called this land home. This is one of the reasons that Natural Bridges National Monument became the first International Dark Sky Park certified by the International Dark-Sky Association. Want to visit? Natural Bridges trails are open day and night and stargazing and exploring the night sky is allowed virtually anywhere in the park.

The national parks and monuments of the Colorado Plateau have long been popular destinations for travelers. In addition to their stunning landscapes and rich cultural history, these areas share another resource: some of the darkest skies remaining in the contiguous 48 United States. The utter darkness of a moonless night in Canyonlands surprises many visitors. At Canyonlands National Park, the naked eye is sufficient to witness a wealth of stars. Under the right conditions, common binoculars may even reveal the rings of Saturn.

In June 2019, Grand Canyon National Park became an official International Dark Sky Park. By day you can stand anywhere along the South Rim and peer down nearly 2,000m into its layer-cake bands of red rock, taking you back two billion years into Earth’s deepest history. When the Sun goes down, the combination of a high elevation and dry desert air means clear, cloudless night skies perfect for viewing the Milky Way. Today, Grand Canyon is one of the most complex, highly-visited, pristine night-sky sanctuaries on the planet.

On a clear, moonless night in Great Basin National Park, thousands of stars, numerous planets, star clusters, meteors, man-made satellites, the Andromeda Galaxy, and the Milky Way can be seen with the naked eye. The area boasts some of the darkest night skies in the western United States. Low humidity and minimal light pollution, combined with high elevation, create a unique window to the universe.

Boasting some of the darkest nights in southern California, Joshua Tree National Park offers many visitors the chance to admire the Milky Way for the first time in their lives. For residents of the greater Los Angeles area – some 18 million people – Joshua Tree is the nearest convenient place to go stargazing under a relatively dark sky. While the western half of the Park is significantly impacted by light from Palm Springs and, to a lesser extent, the cities of the nearby Morongo Basin, visitors who make the trek to the Park’s eastern wilderness area are rewarded with some of the darkest night skies left in the region.