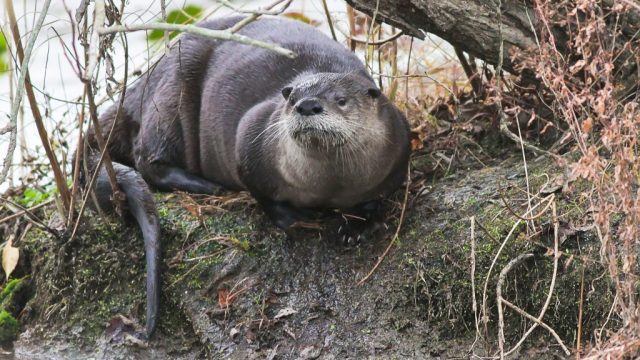 There are 13 different otter species in the entire world. The United States is home to two of them, the North American River Otter and the Sea Otter.

River otters don’t just live in rivers. While their bodies are built for rivers, they can also be found in marshes, coastal areas, and lakes. Their diet includes fish, frogs, insects, crayfish, and turtles. The sea otter, on the other hand, prefers near-shore environments and spends its whole life in the ocean. The sea otter’s diet includes sea urchins, snails, clams, mussels, crabs, and fish.

Otters are in the Mustelidae family, which also includes weasels, ferrets, stoats, badgers, martins, and polecats. Male river otters are called dogs or boars, and females are called sows. They have litters of one to six kits. Their dens are called a holt or a couch. They usually build their dens along the water in empty hollows or abandoned burrows. Their dens have underwater entrances. Their main predators are bobcats, coyotes, raptors, and alligators. River otters have thick water repellent fur to keep them dry.

Sea otters don’t have dens. Instead, they sleep on top of the water on their backs. They usually sleep in strands of kelp so they don’t drift away. Sea otters use rocks to dislodge or pry open food. They are one of the few mammal species to use tools. Sea otters are endangered as they are hunted for their fur. However, due to hunting restrictions and conservation efforts, like those in our National Parks and waterways, their numbers are increasing. Otters are incredible to watch and fun to learn about!