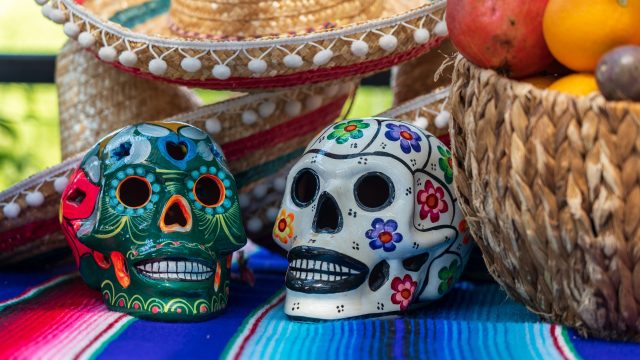 The fall makes up some of the most beautiful months of the year but this season is also considered one of the spookiest. Cultures around the globe have different traditions to celebrate this time of year. Here in the United States, we celebrate Halloween, and in Mexico, they celebrate Día de los Muertos, or Day of the Dead. Many think this is Mexico’s version of Halloween, but while they share common roots, they are two very different holidays.

Día de Los Muertos is a two-day celebration in Mexico typically celebrated on November 1st and 2nd. While the holiday originated in Mexico, it is celebrated all over Latin America with colorful calaveras (skulls) and calacas (skeletons). Families welcome back the souls of their deceased relatives for a brief reunion that includes food, drink, and celebration. On the Day of the Dead, the border between the spirit and the natural world is believed to dissolve. During this brief period, the souls of the dead awaken and return to the living world to feast, drink, dance, and play music with their loved ones. In turn, the living family members leave the deceased’s favorite foods and offerings at gravesites or on the ofrendas built in their homes.

Much like the national parks in the U.S., the national parks in Mexico have their own spooky stories to tell during Día de Los Muertos. Iztaccíhuatl–Popocatépetl National Park, also known as Izta-Popo Zoquiapan National Park, is the oldest national park in Mexico. The park is known for its two active snow-capped volcanoes, Popocatépetl and Iztaccíhuatl, which are among the country’s highest peaks. Legend has it that these two peaks were once lovers bound by loss.

Many years ago, the Aztec empire ruled most of the central-Mexican highlands. In Aztec mythology, Iztaccíhuatl was a princess who fell in love with one of her father’s warriors, Popocatépetl. Her father, the emperor, sent Popocatépetl to war in Oaxaca, promising him his daughter as his wife when he returned (although the father anticipated Popocatépetl would not return). Iztaccíhuatl was falsely told that Popocatépetl had died in battle, and believing the news, she died of grief. When Popocatépetl returned to find his love dead, he took her body to a spot outside Tenochtitlan, the capital of the Aztec empire, and kneeled by her grave. The gods covered them with snow and turned them into mountains. Iztaccíhuatl’s mountain is called “Sleeping Woman,” or La Mujer Dormida, because it resembles a woman lying on her back and is often covered with snow. Popocatépetl became an active volcano, raining fire on Earth in blind rage at the loss of his beloved.