How You Can Help Save Birds of Prey 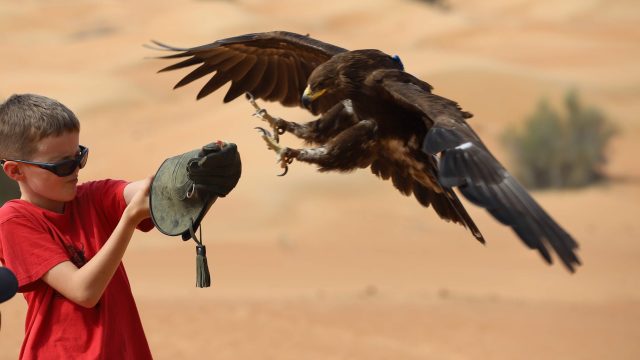 Have you ever admired a turkey vulture circling high above or felt thrilled at the sight of an eagle diving for prey? I have always had a passion for all birds of prey – their unique abilities, their soaring flights – but my favorite is the peregrine falcon with its incredible speed and mobility. Peregrine falcons have an amazing conservation story. Back in the 1960s, peregrine falcons were almost extinct in the United States due to the widespread use of a pesticide called DDT.

Through hard work by several organizations, peregrine falcons have made a miraculous comeback and were removed from the U.S. Endangered Species List in 1999. Sadly, this good-news story is not true for all birds of prey or raptors, as they are also called. The Peregrine Fund, whose mission is to conserve birds of prey worldwide, estimates that more than half of all raptor species (there are about 600 species total) are in decline and 18% are threatened with extinction! The biggest threats are habitat loss, climate change, and toxins. I know these seem like big issues, but we can all help make a difference.

Why should you help? In addition to just being cool to watch, birds of prey help keep our environment healthy. As apex predators, they help balance the ecosystem by not letting their prey populate out of control. Otherwise, their prey would eventually run out of food and die off or move somewhere like your yard looking for food. Famers like birds of prey because they help control insects and rodents from eating their crops without using chemicals. Birds of prey, especially vultures and condors, also remove diseased carrion from the ecosystem by scavenging meat that would make other animals sick. Birds of prey are sensitive to chemicals and pollutants. Scientists monitor their populations to get an early warning that other animals or humans could be in danger too.

What can you do to help? I’m glad you asked! You can do a few easy things and if we all do them it would make a huge difference!

Birds of prey are amazing creatures, but they need our help to survive. Birds of prey benefit humans by keeping pests under control, keeping animal populations healthy, warning us about toxins in our environment, and giving us something beautiful to watch. They are amazing! Let’s show our appreciation for all that by making life safer for them. I hope you consider doing some of these things to protect birds of prey. Together we can save other birds of prey species just like people worked together to save peregrine falcons!