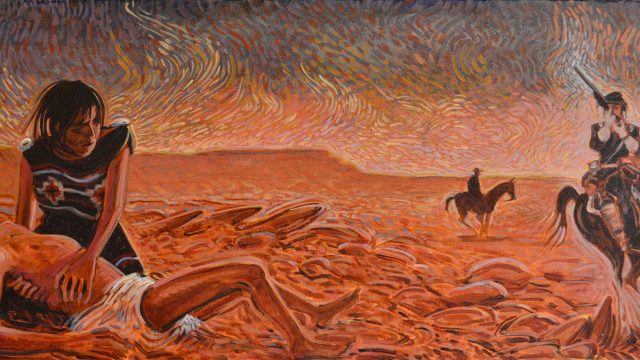 Our newest Buddy Bison Student Ambassador Bryan Wilson has recently moved with his family to Navajo Nation. This summer, Bryan interviewed Edison Eskeets, of The Message, The Run project,  to learn more about the Long Walk and how Mr. Eskeets honored the 150th anniversary of this devastating chapter of Navajo history.

“Ya’at’eeh, this is Jr Ranger Bryan with a message from Navajo Nation:

After hearing accounts from Rangers at Hubbell Trading Post National Historic Site and Navajo National Monument and doing my own research, I learned about one of the most horrible times in Navajo history called the Long Walk.

In 1864, during a brutal winter, approximately 10,000 Navajos were forced out of their homes in present day Arizona and walked over 300 miles to Fort Sumner, New Mexico. Men, women, children, and elderly were surrounded by US Army and if they couldn’t keep up, they were shot on the spot. Those who survived the walk suffered in horrible living conditions at the Bosque Redondo internment camp. Many people ate rats because they were starving. Many more became very ill. One third of the Navajos died. But finally, on June 1, 1868, a treaty was signed to return home where life was anything but back to normal.

June 1st, 2018 marked the 150th anniversary of the Treaty of Bosque Redondo. To commemorate the Long Walk and celebrate the resilience of the Navajo people, Edison Eskeets ran from Chinle, AZ to Sante Fe, NM and retraced the steps of the Long Walk.

I had the pleasure of interviewing Mr. Edison Eskeets, a 66 year old Navajo man, who started his running career as a young boy by herding livestock. He was such a great runner as a young adult he came seconds away from making the Olympics in the Boston Marathon.

I asked Mr. Eskeets why some Navajos were against him running and retracing the steps of the Long Walk. He said, “some traditional Navajos are sensitive and hesitant to it [the events of the Long Walk], but it is important to look at it as history. We have to read about it, learn from it, and understand it because ultimately we don’t ever want it to repeat because if we ignore it then here it is again.”

I also asked Mr. Eskeets what was the message he wanted to share to his people. He said, “A treaty was signed with agreements and they tried to make us leave behind traditions but we [the Dine, the Navajos] survived. The language survived and was maintained and used during WWII and since the treaty the Navajos have done very well and have been successful.”

Mr. Eskeets wanted to leave a message for the youth of today. “Maintain and embrace your ethnic background. When you get older, you will feel the loss. You will wish you could speak your native language and know more about its traditions.”

You can find Mr. Eskeets at Hubbell Trading Post where he works for the Western National Park Association (WNPA). He enjoys learning from and teaching visitors at Hubbell. He’s happy to be a part of the Trading Post history that will survive for a long time.