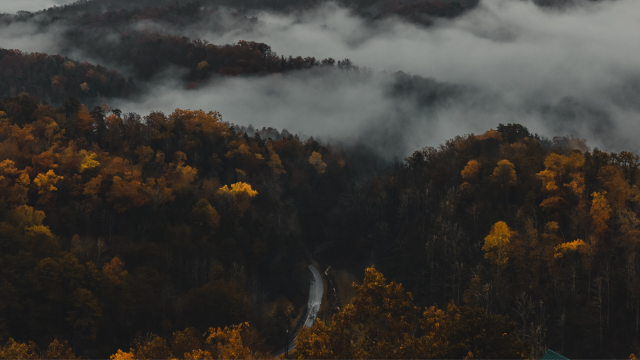 Have you ever heard a strange sound when walking through the woods? Or come across an abandoned cabin? These are typical experiences when exploring the outdoors, but they are also the root of many great scary stories. Continue to read some chilling tales to put you in the Halloween mood, if you dare:

One of the nation’s most well-known parks is certainly not immune to paranormal reports. In 1857, Galen Clark (the park’s first ranger) reported a strange wailing sound coming from Grouse Lake. Believing it was a puppy that was lost, he thought little of it. But when he asked a group of Native people at their camp, they told him that the sounds belong to a boy who drowned long ago and since that time howls at passers-by. To this day, tales of the Grouse Lake Ghost are still told within the park, with many fearing his harrowing cries.

During the 1920s, it is said that a father and son fell to their death after losing their footing on the Transept Trail near Grand Canyon Lodge. Upon hearing the news of her husband and son, the child’s mother became so overcome with sorrow that she decided to take her own life. Known as the ‘Wailing Woman,’ hikers have claimed to have heard her spirit howl as she roams the path her loved ones last took.

The country’s most extensive cave system has generated more than 150 paranormal reports – not surprising given it makes up 400 miles of underground passages! Many of these reports have come from park rangers who deliver tours, but one story, in particular, is well known. It concerns the fate of Floyd Collins, a cave explorer who was pinned down by a boulder at the entrance to Sand Cave. Trapped and in pain, Collins waited for rescuers to arrive, but it was to no avail: four days later, a rockfall sealed him inside the cave, and he starved to death. His fate has sparked claims that his spirit still lingers amongst the dark passages.

If the misty mountains of this park weren’t eerie enough, wait until you hear this Cherokee legend! It concerns the haunting of an evil witch called Spearfinger, who roams the Great Norton Creek Trail. The legend claims that she disguises herself as a grandmother to lure children away from their homes. Then, using her sharp knife-like finger, she cuts them up to feed on their body parts. While many believe this story to be a myth, Cherokee hunters claim to have spotted her on numerous occasions.

Of course, no story about the paranormal can be complete without discussing UFO sightings. In the sandy plains of southern Colorado, strange lights are commonly reported to appear across the night sky. Some claim that this phenomenon first began in the 1600s when local Native people first recorded seeing strange objects in the sky. Nowadays, there are continuing reports of lights, ranging from patterned streaks to random dots, contributing to the mysteries of the area.

Home to ghost forests and deadly glacial silt, it is no wonder that this Alaskan park is full of unsettling urban legends. In July 1988, newlyweds Adeana and Jay Dickison went gold dredging at the nearby Turnagain Arm mudflats. Getting their ATV caught in the mud and trying to push it out, 18-year-old Adeana got stuck herself and eventually drowned in the rising tide. The story goes that attempted rescuers had to wait for hours before the tide receded enough where they could get to the young woman’s body. Some have said that they can still hear a man crying out in vain for help, ghostly echoes of an ATV stuck in the mud, or gasps of a young woman as they walk along the edge of these same mudflats.