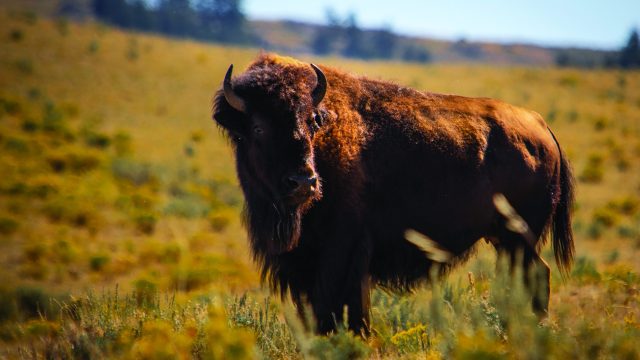 A story from the Blackfoot, Commanche, and Apache tribes:

Years ago, before the time of buffalo and antelope hunting, the people of the Southern Plains Indian tribes were hungry. One day, Coyote (a shapeshifting trickster in Native American folklore) was out looking for food and climbed a high ridge to look around. He saw a small house in the distance with a fenced-in yard. Inside was a large herd of buffalo.

Coyote was shocked, thinking that someone had hidden the buffalo. He felt that hiding the buffalo was unfair because his people were hungry, so he decided to share the buffalo.

He laid down and watched the house for hours. He saw a man, his wife, and their son coming and going, doing chores and taking care of the buffalo. Late in the afternoon, he ran back to the village, told the people what he’d seen, and offered to help them release the buffalo.

The chief’s son from the village said he would go with Coyote. The next day Coyote and the chief’s son walked back to the high ridge. They lay down in the brush and watched the family in the house. The buffalo were still there, but the fences around were too high to climb and too strong to knock down. The chief’s son didn’t know what to do.

Then, Coyote thought of a plan. He and the chief’s son would go to the house to release the buffalo by tricking the young boy. Coyote would pretend to be a dog so that the young boy would let him in. When the family was asleep, Coyote ran amongst the buffalo in his dog form, barking loudly and nipping at their legs. The buffalo were frightened and ran towards the house. They smashed the back door down, charged through the house, smashed the front door, and stampeded out to where the chief’s son was waiting to herd them on.

The family woke up and tried to stop the buffalo but couldn’t. The father then realized that his son’s dog was not a dog but, Coyote, the trickster.

From then on, buffalo scattered all over the earth. Native Americans relied on buffalo for everything from food and clothing to shelter and religious worship. Today, bison are still central to many Native American traditions, spiritual rituals, and healthy diets, and more than 60 tribes are bringing their sacred bison back to their families, lands, and ways of life.