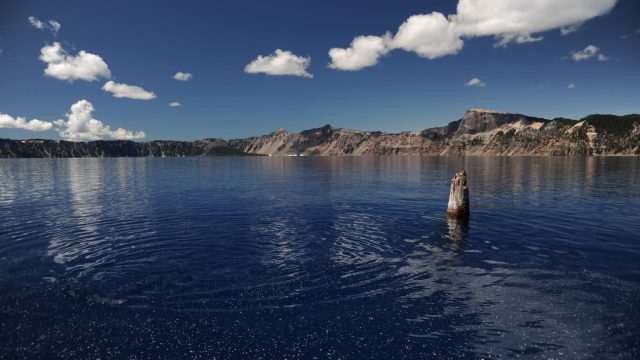 “He has character, a story, and history that is part of the park.”

In 1896, an early park geologist named Joseph Diller visited Crater Lake National Park for the first time. Upon his visit, he discovered a 30-foot Mountain Hemlock log floating upright in the middle of the lake. Able to support a person’s weight, visitors and park staff alike have been puzzled for years over its ability to defy physics. Nicknamed the “Old Man” of Crater Lake, this log has become the subject of legends and the source of curiosity for both the young and old.

At 1,943 feet (592 meters), Crater Lake is the deepest lake in the United States and the ninth deepest in the world. This depth makes the odd floating patterns of the Old Man all the more strange due to the fact there is nothing holding down the bottom and keeping the wood upright in this position. In 1938, park naturalist John Doerr tracked this log between July 1st and September 30th. Doerr recorded the Old Man moving over 62 miles around the lake, with daily travel of up to 3.8 miles and at times moving against the wind.

Fast forward to August of 1988 when a team of scientists brought in a submersible to explore geothermal activity at the lake’s bottom. Given the highly variable patterns of the Old Man, it was seen as a hazard for the research team and was tied up near Wizard Island. Though part of their intention was to protect this icon of the lake, the moment researchers restrained the Hemlock trunk – skies darkened, and a snowstorm moved in. Though it was mid-summer, research halted as conditions made it no longer safe to continue. The story goes that once the Old Man was untied, the weather instantly cleared as the log gained its freedom.

Though we only have accounts of the Old Man from the past 125 years, carbon dating tells us that the original tree is more than 450 years old. There are many theories about how this log continues to float – ranging from an increase of density from the cold water, a root structure that once would have stabilized the bottom, to something connected to the unique moss that grows on it starting a few feet down. While many visitors and scientists have puzzled over the physics of the Old Man, others are content with letting this story stay a mystery within the realm of park lore.

Do you have any theories about how this piece of wood floats?