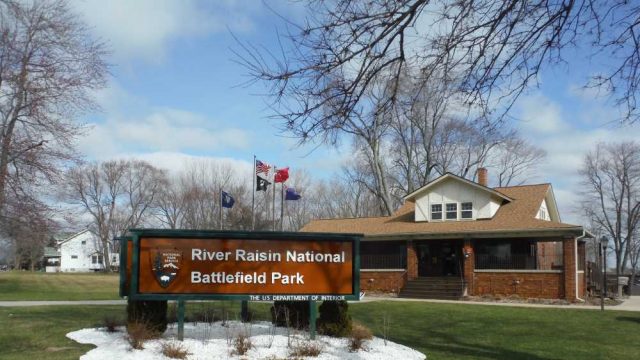 Numerous partners came together to preserve this area of land that many consider the most important part of the historic War of 1812 battlefield. The Michigan Natural Resources Trust Fund, administered by the Michigan Department of Natural Resources, made a grant of $4.986 million to the City of Monroe. The grant was awarded under the condition that the city match it with $2 million from other sources

Thanks to a $204,000 grant from The Carls Foundation, the $2 million match requirement was met, and the last $506,000 of the grant can be obtained. The total available, $710,000 allows the purchase of 7 properties to benefit the city and the National Park Service.

The land acquisition is part of a federal, state and local effort to restore the cultural landscape of the battlefield, create greenspace in the Monroe area, and clean up the environment around the River Raisin. The added acreage, obtained from willing sellers, was part of a residential neighborhood in Frenchtown, a historic town and the site of the Battle of Frenchtown during the War of 1812. Houses will be removed to begin restoration of the historic landscape of the battle and banks of the River Raisin.

In January 1813, British and American Indian forces defeated the American army; in the aftermath of the battle, many wounded American troops in Frenchtown, unable to travel as British prisoners were killed. “Remember the Raisin” became a powerful American rallying cry for the remainder of the War.

Mark Cochran, Assistant to the City Manager for Monroe said “This land acquisition project has been ongoing since 2014, and we are very grateful for The Carls Foundation and National Park Trust for getting us across the finish line to satisfy our local match requirement for the Michigan Natural Resources Trust Fund grant. This project is transformational for our community, and it is all made possible because we have strong, collaborative partnerships with many stakeholders at all levels in the public and private sectors working together to make a vision become reality.”

National Park Trust Executive Director Grace Lee said, “We are very grateful for the generous support from the Carls Foundation which with the matching gift from the State of Michigan, allows for the significant expansion of River Raisin National Battlefield, the preservation of the story of the War of 1812, and an enhanced visitor experience.”

Carls Foundation Executive Director Elizabeth Stieg said “We are pleased that we could play a part in preserving the historic River Raisin National Battlefield Park.  By opening up access to the Battlefield and the River Raisin, visitors and residents of Monroe will be able to enjoy the open space, wildlife and history of Michigan.  Please come and visit!”