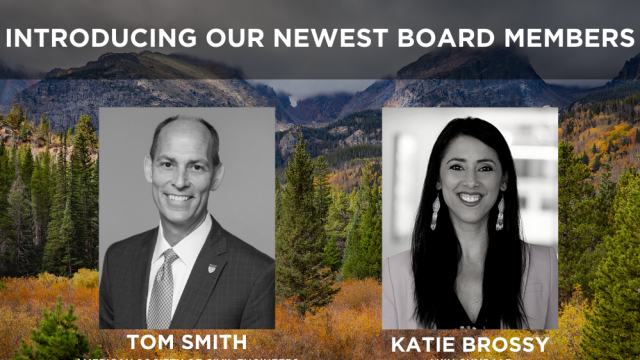 Washington, D.C. (December 16, 2021) – The National Park Trust today announced that Katie Brossy, and Tom Smith have been elected to the Board of Trustees. Both will help further National Park Trust’s mission of preserving parks today and creating park stewards for tomorrow. Katie will be serving on the board’s Youth and Family Programs Committee while Tom will be serving on the Lands and Park Preservation Committee.

Katie Brossy, the first Native American member of the Park Trust Board,is an American Indian law and policy lawyer with the Washington, D.C.-based law firm, Akin Gump LLP. As a Ponca Tribe of Nebraska and the Santee Sioux member, Katie has primarily focused on representing Native tribes in water rights and tribal trust claim settlements. Katie serves as a member of the Akin Gump Inclusion Council and was a past Native American Bar Association president. She holds a B.A. from the University of Nebraska at Lincoln and a J.D. from Columbia Law School.

Tom Smith has been a member of the American Society of Civil Engineers for over 25 years. In January 2015, Tom became the association’s executive director and secretary after serving as the deputy executive director and general counsel. Before his work with ASCE, Tom practiced law in Northern Virginia with Hazel & Thomas, P.C. where he practiced commercial, construction, and land use litigation. He holds degrees in structural and civil engineering from the University of Virginia.

“Both Tom and Katie’s expertise and passion for our national parks and public lands will provide an important and unique perspective on our mission and programs as we protect and preserve our country’s important natural, cultural and historic resources for current and future generations.”

National Park Trust is a non-profit dedicated to preserving our national parks. The Park Trust accomplishes this goal through land acquisition to expand and “complete” our national parks and by creating a pipeline of future park stewards by connecting kids to parks. Established in 1983, the Park Trust has preserved nearly 30,000 acres in 31 states, one U.S. Territory, and Washington, D.C. In addition, since 2009, National Park Trust has engaged more than 3 million kids and families with the great outdoors through their national Buddy Bison School Programs and annual Kids to Parks Day. Find out more about the Park Trust’s mission of preserving parks today and creating park stewards for tomorrow at www.parktrust.org.