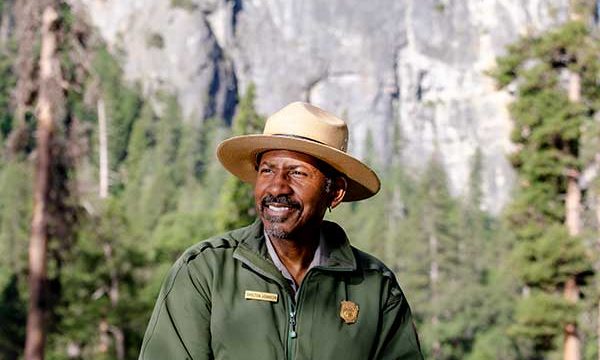 Scroll below to see images from the ceremony held on May 10, 2022, in Yosemite National Park.

Washington, D.C.  – National Park Trust is pleased to announce that National Park Service Ranger Shelton Johnson will receive the 2022 American Park Experience Award. Since 2009, this national award honors an individual or group that has made extraordinary efforts to enhance the awareness and appreciation of our nation’s public parks, lands, and waters.

This award recognizes Johnson’s passion for ensuring that our parks are for everyone. His lifelong efforts advocating for diversity in national parks have helped more families and youth feel welcome as they see their stories told throughout the country in parks, cultural, and historic sites alike.

“The National Park Trust board is honored to recognize Shelton Johnson as this year’s American Park Experience Award recipient. His talent and enthusiasm are infectious, and he has used his gifts to encourage all, especially those from diverse communities, to visit, feel welcome, and experience the beauty and history found in our nation’s parks. A national park celebrity, Shelton has greatly enhanced the awareness and appreciation of our parks.”

Introducing African Americans to the wonders of the national parks has been a passion of Johnson’s throughout his career.  As a noted storyteller, role model, mentor, and literal trailblazer, Johnson has worked for the past 35 years as a park ranger with the National Park Service at Yellowstone and later Yosemite National Park. His extraordinary storytelling talents resulted in his prominent role in the Ken Burns film: The National Parks: America’s Best Idea.

He also credits his work with Oprah Winfrey as a significant breakthrough in introducing Black Americans to the wonders of America’s national parks.  In 2010, Johnson hosted Oprah and Gayle King on a multi-day camping trip which was captured on national television and broadcast around the globe. “Many people first heard about my work to connect the disconnected by watching Oprah’s talk show that year,” said Shelton Johnson. “I have had multiple African Americans come up to me in Yosemite Valley just to shake my hand, but Oprah convinced them to visit, and the beauty of Yosemite did the rest.”

At a young age, Johnson developed a deep love and appreciation for the wilderness, the mountains, and the outdoors. After studying English and poetry at the University of Michigan and serving with the Peace Corps as an English teacher in Liberia, he was hired as a concession worker in Wyoming’s Yellowstone National Park. He subsequently secured a position as a park ranger in 1987, a position that sparked his advocacy for increasing ethnically diverse visitors to our iconic national parks.

He currently serves as a community engagement specialist at California’s Yosemite National Park, where he has worked for 28 years. He focuses on retelling the story of the 24th Infantry Regiment and the 9th Cavalry Regiment, known as the “Buffalo Soldiers,” and their substantial impact on our country.

“I am humbled to be the recipient of National Park Trust’s 2022 American Park Experience Award. This recognition reflects the work that I, and many others, have been engaged in for decades to make our public lands a welcoming environment for everyone. Every child in America deserves to have an experience of wonder during their youth. Our national parks embody that space where astonishment is the atmosphere we breathe! Those moments of transcendence provide a strong foundation for a future where all our dreams of a truly inclusive democracy can take root, grow, and become kin to that luminous entanglement we call a forest, a desert, a wetland, a homeland, a home.”

“National parks are a true reflection of our democratic society and the diversity of people who shaped this nation. For too long many of those stories have gone untold. Shelton’s life’s work has helped open those floodgates, and the national parks and the public we serve are better for it. I can’t think of a more worthy recipient for this recognition.”

Past recipients of the American Park Experience Award include HydroFlask (2021) for their Parks for All program; Sally Jewell, former Secretary of Interior (2016); Ken Salazar, former U.S Senator (CO) and former Secretary of Interior (2010); and Ken Burns and Dayton Duncan (2009). Click here to learn more about our past American Park Experience awardees.

Photos from May 10th Award Ceremony:

Join Park Ranger Shelton Johnson and his guests as they explore the complexities of storytelling and interpretation at three African American Heritage sites.