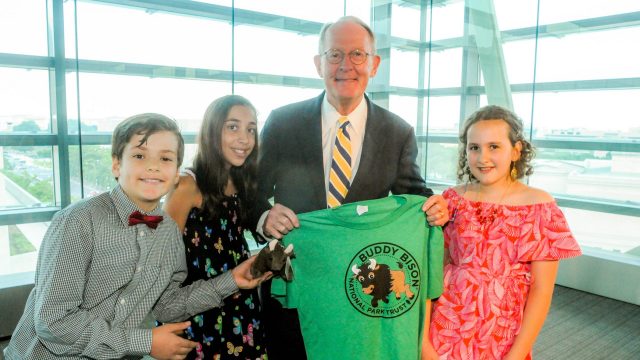 “Senator Alexander is recognized for his extraordinary efforts to support our national parks and public lands.”

In his work on the Senate Appropriations Subcommittee on Interior and Environment, Sen. Alexander has been a dedicated and strong supporter of our national parks. He is honored for his exemplary work on the Senate Committee on Energy and Natural Resources, where he serves on the Subcommittee on National Parks.  As a member of this committee, he demonstrates his commitment to protecting our national heritage by sponsoring legislation to incorporate hallowed ground into Shiloh National Military Park and give special designation to Parker’s Crossroad Battlefield. Senator Alexander has also sponsored legislation to take the next step in preserving former President James K. Polk’s home in Columbia, Tenn., as a site within the National Park System.

He supports permanently reauthorizing and full funding of the Land and Water Conservation Fund and has worked to protect wild lands through sponsorship of an act to designate 20,000 acres of land in the Cherokee National Forest as federal wilderness. Most recently in April 2017, he co-sponsored the National Park Service Legacy Act, legislation that would help to reduce NPS’s $12 billion maintenance backlog, including $232 million for the Great Smoky Mountains National Park.

“Sen. Alexander has demonstrated leadership in creating the next generation of conservationists by working to ensure that everyone, regardless of their age, ethnicity or income level will have access to our parks and public lands.”

This is further exemplified by his co-sponsorship of a Senate Resolution in 2016 and 2017 in support of Kids to Parks Day.

“Documentarian Ken Burns called the U.S. National Park Service, ‘America’s best idea’ – and I couldn’t agree more. Growing up in the foothills of the Great Smoky Mountains, I learned to appreciate our national parks and public places at an early age, and I have put that love for the outdoors to work as a United States Senator, trying to protect our parks, help make the air cleaner, and provide protected open spaces so that our children and grandchildren can enjoy the outdoors as I did. I am grateful for this award, but really it’s the National Park Trust that deserves praise for its work in protecting and preserving national parks and connecting children to the Great American Outdoors.”

“Senator Lamar Alexander’s decades of service in Washington, D.C. and at home in Tennessee, will not only help to preserve America’s national parks today but also guarantee that they will be here for the enjoyment of future generations.”

All proceeds from the event benefit the Park Trust’s park preservation and youth programs.

National Park Trust is a 501(c)(3) nonprofit organization dedicated to preserving parks today and creating park stewards for tomorrow.  Since 1983, the Park Trust’s land preservation projects have benefited more than 40 national parks. In 2009, the Park Trust launched its nationally recognized Buddy Bison School Program which currently supports 62 Title I elementary and middle schools. Since 2011, the Park Trust has organized Kids to Parks Day, an annual national celebration of America’s parks hosted on the third Saturday in May. More details about the Park Trust and this award can be found at www.parktrust.org.