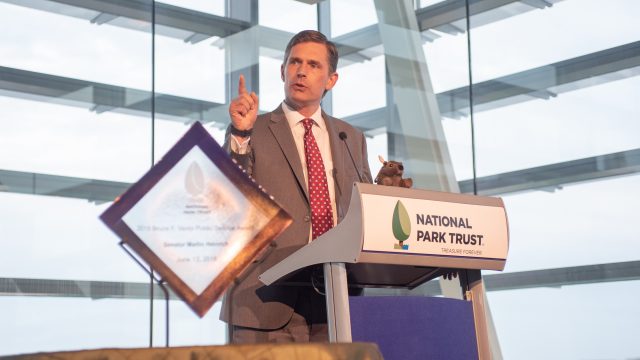 Washington, DC (June 13, 2018) – At an evening reception at the Newseum, the National Park Trust awarded Sen. Martin Heinrich (NM) with the 18th Bruce F. Vento Public Service Award. The award was presented by the Park Trust board chair Bill Brownell.

“Our national parks not only celebrate some of the most extraordinary natural places in our country, they are also part of the fabric of our democracy and fuel our thriving outdoor recreation economy. I am honored to receive this award from the National Park Trust and appreciate the work they do every day to protect our public lands for future generations to enjoy.”

Senator Heinrich was recognized for his numerous accomplishments including his leadership in creating two treasured National Monuments in New Mexico — the Rio Grande del Norte and the Organ Mountains-Desert Peaks National Monuments. He also has helped to create the 45,000 acre Columbine-Hondo Wilderness area, and worked to protect the natural and cultural resources in the Valles Caldera National Preserve while ensuring that new management will increase access for hunting and fishing.

He was instrumental in opening up the Sabinoso Wilderness to the public, which was the only legally inaccessible wilderness area in the country, and he worked to have legislation signed into law to establish the Manhattan Project National Historical Park after more than a decade of support from the local community. He has consistently advocated for permanent funding for the Land and Water Conservation Fund. In May 2018, the Senator introduced legislation to designate White Sands National Monument as a National Park.

Recognizing the importance of encouraging kids to experience the great outdoors, in 2017, through bipartisan efforts, Senator Heinrich introduced the Every Kid Outdoors Act to provide all fourth graders nationwide free entrance to federally managed land, waters, and historic sites, including national parks. And once again he co-sponsored the 2018 National Kids to Parks Day Senate resolution.

“We are delighted to be able to honor Senator Martin Heinrich for his service in Washington, D.C. and at home in New Mexico to support bi-partisan legislation and programs that will not only preserve America’s national parks and public lands today but also ensure that they will be here for the enjoyment of our country’s families tomorrow.”

ABOUT THE VENTO AWARD

All proceeds from the event benefit the Park Trust’s park preservation and youth programs.

National Park Trust’s mission is preserving parks today; creating park stewards for tomorrow. In the 35 years since the Park Trust was established, the non-profit organization has completed more than 60 land acquisition, restoration, and mitigation projects in 30 states, 1 U.S. Territory and Washington, D.C. including 48 National Park Service projects. In 2009, the Park Trust launched its nationally recognized Buddy Bison Programs which currently supports more than 200 Title I schools across the country. Since 2011, the Park Trust has organized Kids to Parks Day, an annual national celebration of America’s parks hosted on the third Saturday in May. For more details about the Park Trust can be found at www.parktrust.org.