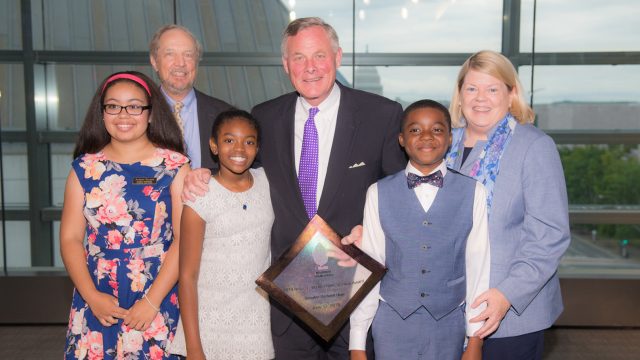 Senator Burr was recognized for his numerous accomplishments including his leadership in seeking permanent funding for the Land and Water Conservation Fund – a vision he shared with the award’s namesake, Congressman Bruce Vento. Furthermore, his sponsorship of the Blue Ridge National Heritage Area Reauthorization Act and ongoing efforts to protect the Corolla Wild Horses demonstrates his continued commitment to protecting some of America’s most valuable ecological and historical resources.

“It’s an honor to be recognized by The National Park Trust, and I want to thank them for their support. I strongly believe it’s our responsibility to preserve America’s natural landscapes and parks, so our children and grandchildren can enjoy them as much as we have. North Carolina has over 19 million visitors to its National Park Service Units each year, and organizations like The National Park Trust work diligently with their federal partners to help make those lands accessible. I will continue fighting for common-sense conservation efforts as long as I serve in the Senate.”

Senator Burr has been a strong proponent and active defender and protector of the core values of conservation in this country. As a member of the Senate Finance Committee and the Subcommittee on Energy, Natural Resources, and Infrastructure, Senator Burr has supported and advocated for the protection of our national parks, public lands and waters. He also serves on the Senate Aging Committee, Senate Committee on Health, Education, Labor, and Pensions, and chairs the US Senate Select Committee on Intelligence.

Three students joined the Park Trust to recognize the Senator: Audrey Elliott, 11 years old from Nebo, NC who is one of the Park Trust’s four student ambassadors and Morgan Marsh and Amari Sowah. Amari and Morgan are 9 years old and attend Elsie Whitlow Stokes Public Charter School, one of 21 Buddy Bison Schools in the Washington, DC metro area.

Student Ambassador Elliott reiterated that “North Carolina has over 19 million visitors to our National Park Service units each year. It is my mission to increase the awareness of our national parks and encourage other kids to protect these important places. Thank you, Senator Burr, for helping make this possible.”

“We were delighted to be able to honor Senator Richard Burr for his service in Washington, DC and at home in North Carolina to support bi-partisan legislation and programs that will not only preserve America’s national parks and public lands today but also ensure that they will be treasured forever.”

ABOUT THE VENTO AWARD

All proceeds from the annual event benefit the Park Trust’s park preservation and youth education programs.

National Park Trust is a non-profit dedicated to preserving parks today and creating park stewards for tomorrow. The Park Trust is the only land trust with a comprehensive mission of protecting national parks through land acquisition and creating a pipeline of future park stewards by getting kids to parks. Since 1983, the Park Trust has completed 70 land projects in 31 states, 1 US Territory, and Washington, DC. This school year, the Park Trust provided nearly 20,000 children with park trips through their nationally recognized Buddy Bison Programs and Kids to Parks Day National School Contest, both of which support Title I schools in under-served communities.

Find out more at www.parktrust.org.