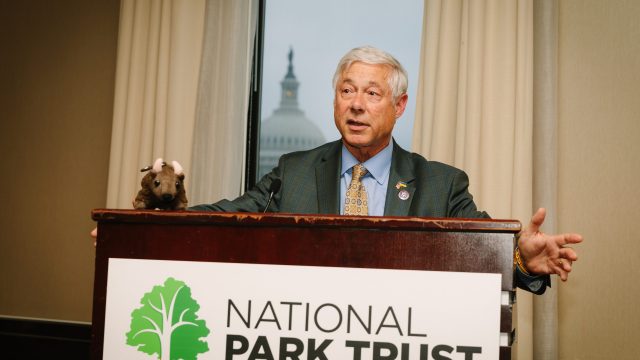 Washington, DC (June 23, 2022) – Last night, National Park Trust honored Congressman Fred Upton with the 22nd Bruce F. Vento Public Service Award in Washington, DC. This national award honors a public servant for his or her commitment to the environment, and their service, skill, and innovation in support of our public lands and waters.

“Having grown up on the shores of Lake Michigan, Congressman Upton has dedicated his life to the families of Southwest Michigan. Throughout his decades of public service, he also has been a strong advocate for co-sponsoring landmark policies that protect our natural resources, public lands, and waters both locally and nationally.”

In addition, he is well known for his bipartisan work in the House, where he serves on the Bipartisan Climate Solutions Caucus and the Bipartisan Problem Solvers Caucus.

Throughout his 35-year career, Upton has shown a special interest in protecting public waters co-sponsoring the Microbead-Free Waters Act, advocating for resources for the Great Lakes Restoration Initiative, and supporting the Great Lakes Task Force.

“I am incredibly honored to accept the Bruce F. Vento Public Service Award. With the pandemic, people in record numbers turned to the great outdoors for recreation and comfort. We all gained a deeper appreciation for nature and the well-being it inspires. Whether it’s keeping our water free of toxic chemicals, ensuring funding for parks, or protecting our Great Lakes, these are all important endeavors. We truly have a national treasure right in our backyard, and it is the duty of every Michigander to protect and invest in our lakes. Thank you for selecting me for this award and I look forward to preserving our national and state environments for generations to come.”

National Park Trust established the Vento Award in 2001 to honor the memory and legacy of Bruce F. Vento, a twelve-term Congressman from Minnesota, dedicated environmentalist, and a champion of legislation for America’s parks.