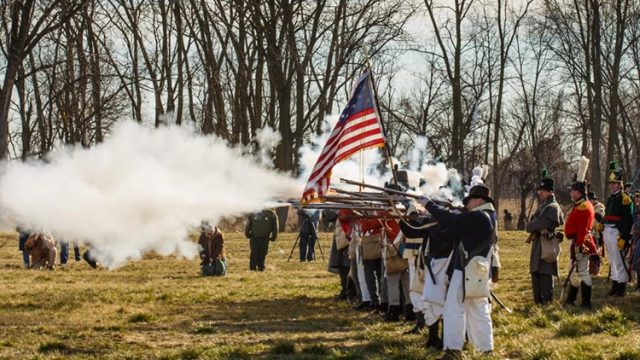 Washington, DC (April 5, 2019) – National Park Trust is thrilled to announce that in partnership with The Carls Foundation, the City of Monroe, and the Michigan Department of Natural Resources (DNR) it will work with River Raisin National Battlefield Park to acquire and restore seven parcels near the park which are integral to the preservation of the battlefield. Together the groups will contribute $711,000 to purchase and restore these parcels.

The land parcels are located along the riverbank of the River Raisin and north of the current River Raisin National Battlefield Park boundaries in Monroe, Michigan. Each of the seven parcels is important in completing the vision of a historically accurate re-creation of Frenchtown as it was in 1813 when the battle occurred.

National Park Trust, a non-profit dedicated to preserving parks today and creating park stewards for tomorrow, worked to establish the partnership between The Carls Foundation, Michigan DNR, and the National Park Service. After identifying the amount needed for River Raisin National Battlefield Park, the Park Trust secured funding from the Carls Foundation of Bloomfield Hills by applying for one of their highly competitive grants. After careful consideration–and meeting their rigorous standards for conservation and preservation–they awarded a grant to the project for $206,000.

The partnership between National Park Trust and The Carls Foundation was key in securing matching funding from the City of Monroe and a Michigan Natural Resources Trust Fund Grant. The state will be matching each dollar given by The Carls Foundation with nearly $2.50, accounting for 71% of the total project cost. This is one of the most significant grants of its kind from Michigan DNR to support an urban land project.

“The highest priority for the battlefield since its establishment has been the acquisition, restoration, and preservation of the lands related to the battles of the River Raisin. By preserving and restoring lands related to the battlefield, the archeological, cultural, and natural resources that helped shape who we are as a people will be preserved for the educational and recreational benefit of future generations.”

“We at National Park Trust are thrilled to work with The Carls Foundation, the Monroe community, and the State of Michigan to better preserve River Raisin National Battlefield Park. We hope that more Americans remember and appreciate the powerful history of the battle and its aftermath. The more this conflict is understood, the better we can prepare future generations when it will be their turn to make history. We are pleased and proud to be a part of this effort.”

“The City of Monroe is grateful to have a new partner in implementing the vision of the River Raisin Heritage Corridor East Master Plan. The generosity and support of The Carls Foundation and National Park Trust is crucial to maintaining the momentum we have been gaining to bring this vision to reality. These new partnerships, along with the Michigan DNR and National Park Service support, demonstrate yet again the strength and importance of public-private collaboration to this project.”

Robert Clark, Mayor of the City of Monroe

The project is estimated to begin in May of 2019 when the properties are purchased for the benefit of the park. Park officials anticipate that some of the sites will be formally preserved as a part of the Battlefield land preservation partnership by early 2020.

National Park Trust is a non-profit dedicated to preserving parks today and creating park stewards for tomorrow. The Park Trust is the only land trust with a comprehensive mission of protecting national parks through land acquisition and creating a pipeline of future park stewards by getting kids to parks. Since 1983, the Park Trust has completed 70 land projects in 31 states, 1 US Territory, and Washington, DC. This school year, the Park Trust will provide an estimated 25,000 under-served kids with park trips through their nationally recognized Buddy Bison Programs and Kids to Parks Day National School Contest, both of which support Title I schools.

Find out more at www.parktrust.org.

River Raisin National Battlefield Park preserves, commemorates, and interprets the January 1813 battles of the War of 1812 and their aftermath in Monroe and Wayne counties in southeast Michigan. The Battles of the River Raisin resulted in the greatest victory for Tecumseh’s Confederation and the greatest defeat for the United States during the War of 1812. Although American forces were victorious in the first battle, the second ended in what was described as a “national calamity” by then General William Henry Harrison, and later President of the United States. The battle cry, “Remember the Raisin!” inspired a massive US victory at the Battle of the Thames, which sealed the War of 1812 in the western theater for the US, claimed the life of the great Shawnee War Chief, Tecumseh, and resulted in the end of the American Indian Confederation. The aftermath of the battles resulted in the formation and implementation of Indian removal policies and laws at the conclusion of the War of 1812, an aftermath that continues to influence the United States today.

For more in-depth information about the battlefield please visit www.nps.gov/rira/ or www.battlefieldfoundation.org.

ABOUT THE CARLS FOUNDATION

The Carls Foundation was founded in 1961 by William and Marie Carls. Mr. Carls immigrated to the United States in 1924 from Germany. After years as an apprentice and working for a number of major companies, Mr. Carls founded Numatics, Inc. in 1945. In 1953, Mr. Carls patented a unique spool-and-sleeve pneumatic valve that is still in use today.  Mr. and Mrs. Carls felt privileged and proud to be American citizens, which inspired them to establish a charitable foundation in 1961. Mr. Carls considered his funding of the Foundation as a way to return benefits to his community and country, and as an expression of his appreciation for the great opportunities which America afforded him. Today, the Carls Foundation continues the legacy of William and Marie Carls by supporting efforts to improve the welfare of children and preserve America’s treasured natural areas within the state of Michigan.

Find out more at carlsfdn.org