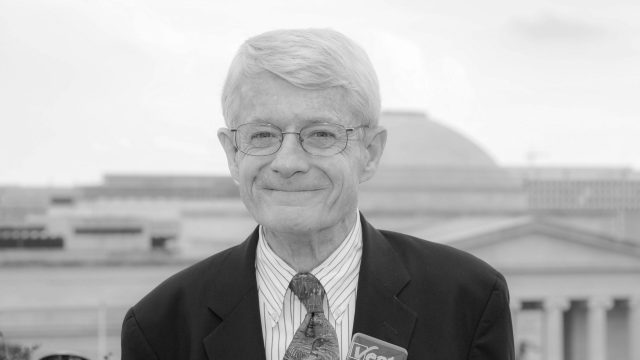 John Rollins, as a child, spent summer vacations touring the country and visiting national parks with his family as they drove east, west, north, and south from Kansas City where he grew up. By the time he was 11, John had visited all but one state. Beginning at age 11, he spent summers at a 9,000-foot elevation boys camp in the Rocky Mountains where he climbed some of our country’s highest peaks, including Mt Elbert. His appreciation of nature and the outdoors grew in Boy Scouts when he did extensive camping and earned his Eagle Scout at age 14. Today John bikes regularly in Rock Creek Park and the C&O Canal National Historic Park. In the summer, he hikes in the White Mountains of New Hampshire near Squam Lake where he and his wife spend time with their family.

“As a founding trustee of the NPT, I was privileged to be involved in the creation of the Tallgrass Prairie National Preserve in Kansas. Since then, it has been fulfilling to see NPT expand its mission from protecting threatened parkland to my current passion: providing opportunities for underserved youth to have an American park experience, as I did, by connecting them with our nation’s parks and the outdoors.”

John is a serial entrepreneur and founder of multiple tech startups—the longest of which he served for 30 years as Founder, CEO and Chairman. Following the sale of that company, Rollins served as Professor of Entrepreneurship at the George Washington University from 2001 to 2015. In 2008 he founded GW’s New Venture Competition which has grown to be the nation’s fifth-largest university business plan competition.

Rollins earned his MBA at the Stanford Graduate School of Business and his bachelors degree in honors mathematics at Dartmouth. He is a founding board member of the National Park Trust and has more than 130 years of service on non-profit boards ranging from a local Boy Scout Troop to MedStar, the largest non-profit healthcare delivery network in the Washington DC region. His current board positions, besides NPT, include MedStar Southern Maryland Hospital Center (Board Chair) and 20/20 GeneSystems, Inc.