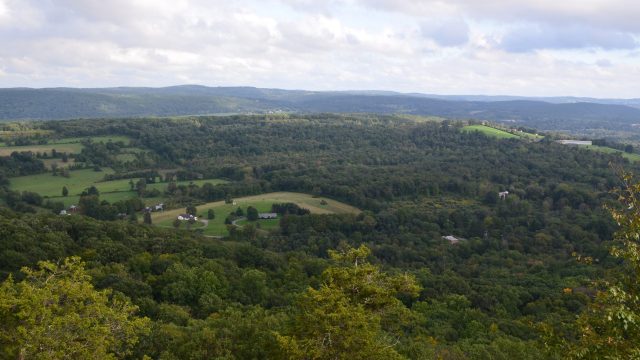 In May 2018, National Park Trust joined The Trust for Public Land, Appalachian Trail Conservancy, and Oblong Land Conservancy in the $2.38 million purchase of woodlands near Pawling, New York. The 219-acre property was transferred to the National Park Service for the Appalachian National Scenic Trail (AT) in July 2018.

Adding the land to the AT preserves exceptional scenic views over the property; the land was planned for a 50-unit subdivision, had it not been acquired for the AT.

The NPS can relocate a length of the AT to the new addition and avoid a marshy wetland where current hiker traffic is in conflict habitat of several endangered animal species. Another section can be rerouted from private land and NPS will be able to move a parking area away from the landmark Dover Oak. The eastern white oak is the largest tree along the entire length of the Appalachian National Scenic Trail. Compaction of soil by cars parked around it threatens its root system and long-term survivability. It is a local landmark and the largest white oak in New York State at over 114 feet in height and a circumference of over 20 feet.

Another great feature of this section of the trail is that hikers can reach it by a 1.5-hour train trip from Grand Central Station in New York City, disembarking at the Appalachian Trail Train Stop. The train runs twice a day in the morning and again in the afternoon on the weekends. As such, this section of the Appalachian Trail is one of the most accessible National Park System units to an urban population.

Due to each of these unique attributes, this property was the number one priority for the National Park Service nationwide for 2018.

National Park Trust made concerted efforts over the past few years to protect and expand land surrounding the Appalachian National Scenic Trail. In 2017, the Park Trust joined with The Trust for Public Land to acquire a 1,494-acre parcel of old-growth woodland in Somerset County, ME. It is one of the largest uncut forest blocks in central Maine, with individual trees cored at almost 200 years old. The land protects nearby Bald Mountain Pond, one of the few bodies of water in the lower 48 states which hold arctic char. The federally-listed threatened Canada lynx roams nearby along with moose, fisher, and black bear. The remoteness and scenic views make the property an iconic destination for backcountry adventures. Visitors can combine paddling and hiking on the AT into a single day’s outing.

In 1996, National Park Trust bought a small but historic viewshed atop South Mountain, near Highfield-Cascade in Maryland. The site was a part of the Confederate artillery position during the September 14, 1862 Battle of South Mountain, with over 5,000 casualties. Troops there marched to the Battle of Antietam on September 17. By preserving this land and donating it to the National Park Service, hikers can continue to see the landscape that played a pivotal role in the Civil War.