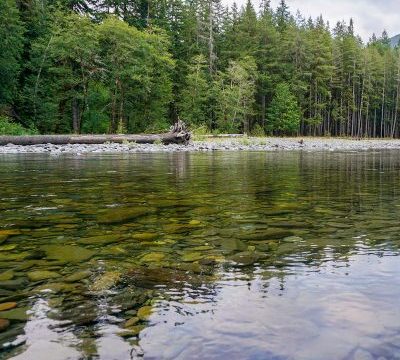 In December 2017, the Park Trust completed the acquisition of 0.39 acres of land on Lake Quinault in Olympic National Park (WA). Although small in size, it is big in ecological significance. The private parcel, which was surrounded on three sides by national park land, is now part of Olympic National Park. The acquisition keeps it in its natural state by eliminating its potential for development. It helps protect Grandey Creek, which runs along the property edge, as well as water quality for the Quinault River and Lake Quinault, adjacent to the park. The lake and river system support populations of sockeye, chum, and Chinook salmon as well as steelhead, bull, and Dolly Varden trout. The Quinault National Fish Hatchery, downstream from the lake, raises salmon and steelhead which populate the river.

Olympic National Park, established in 1918, occupies over 922,000 acres on Washington State’s Olympic Peninsula, 876,447 of which is federally designated wilderness. Streams and rivers radiate out from the mountains, feeding through subalpine forests and temperate rain forests on their way to the Pacific Ocean. The Quinault River widens into Lake Quinault, a glacial lake formed about 15,000 years ago, then re-forms as a river before it flows onto the ocean. The lake lies within the rainforest, dominated by some of the tallest trees of their species. Douglas fir and western hemlock may grow to over 200 feet. The largest Sitka spruce on Quinault Lake measures 191 feet high and the largest western red cedar in the area is 159 feet tall.

Water quality is important to the health of lake and river ecosystems, and it influences population levels of aquatic life. Salmon and steelhead populations in the area, for example, were historically reduced by sediments flowing into the river and lake as a result of logging operations in the area.