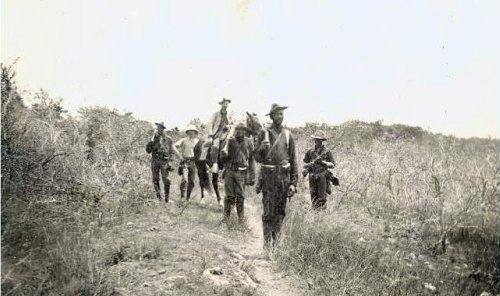 We all know the singer Bob Marley, and many of us know the song “Buffalo Soldier“. But something you may not know is the true meaning behind the song. In this post, I will be talking about the valiant buffalo soldiers of the US army. Here is a little background on them. They began as members of the US Army’s 9th and 10th Cavalry Regiments, which were formed on September 21, 1866. The name “buffalo soldiers” was given to them by Native Americans who claimed they had dark and curly hair like the buffalo. They went on to serve for eight decades, until they were disbanded on December 12, 1951.

One of their most legendary leaders was Charles Young (pictured to the right). He was one of the few black officers in the army at the time. Young served around the globe during his thirty-seven-year career, from Haiti to the Philippines, to Mexico. He was born as the son of former slaves in 1864, later he attended West Point Military Academy, where he became only the third black cadet to graduate and become a commissioned army officer. At the time there were only four black regiments, two infantry companies, and two cavalry brigades. Second Lieutenant Young served first with the 25th Infantry at Fort Custer, Montana. Later, the army assigned him to the 9th Cavalry at Fort Robinson, Nebraska, and Fort Duchesne, Utah. After five years of serving he was made a professor at a Black college in Ohio. Finally, after a 37-year service career, he retired at the rank of colonel, the highest rank held by an African American at the time.

Colonel Charles Young and hundreds of others served this country bravely at a time when their service was not appreciated by many. Even though this was the case they served anyway, despite the fact that they started many steps behind their fellow soldiers and countrymen. Another Buffalo soldier who went above and beyond was Sergeant Henry Johnson. He was one of the very few African Americans who have received the Medal of Honor.

Though these men are no longer with us, I believe that it is our responsibility to honor these men and women for their service and to learn from them to improve on the issues that they faced and that many people around the world still face.

This year, National Park Trust is proud to honor park ranger Shelton Johnson as our 2022 American Park Experience Award winner. Shelton Johnson currently serves as a community engagement specialist at California’s Yosemite National Park, where he has worked for 28 years. He focuses on retelling the story of the 24th Infantry Regiment and the 9th Cavalry Regiment, known as the “Buffalo Soldiers,” and their substantial impact on our country. You can learn more about Mr. Johnson here.