Critters on the Colorado Trail 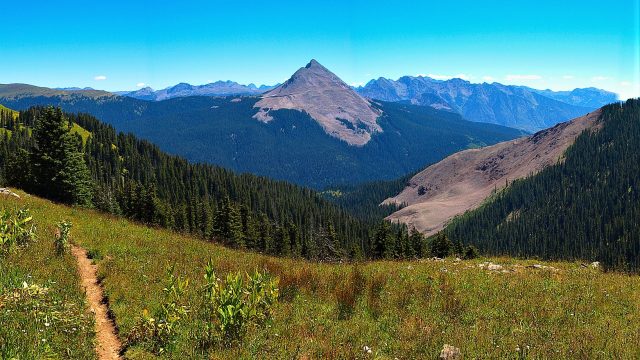 Earlier this year my family and I backpacked the Colorado Trail. It is 500 miles long and goes from Denver (the capital of the state of Colorado) to Durango (a town in the state of Colorado). It goes across many mountain ranges, valleys, and other places. After the halfway point of that trail, we began to see a lot of marmots and pikas, which became our favorite animals on the trail.

Marmots look like beavers but with a long round tail. The adults are around a foot long. Pikas look like big, furry, light-grey and brown mice with small round ears. They are cute. They are usually 4-6 inches long.

Marmots and pikas like alpine zones, which are zones that are at high elevations above the trees. Pikas come out in the early morning, but marmots don’t come out until it is warm. Marmot babies are called pups and play and wrestle in the grass. We saw some pups having fun in the grass tumbling around. Pikas like rocky areas in the alpine zone more than other areas, because it is easier for them to hide. The gaps in the rocks are big enough for them to run through and they are fast. It also makes building their homes easier. When we walked down the trail sometimes we would see the pikas zooming through the gaps in the rocks. It was fun to watch.

We also saw some cool weasels that could fit through those gaps. They hunt pikas. The ones we saw were long-tailed weasels, which are brown with a yellowish belly and a black-tipped tail. They have a long, narrow body shape, a long, long tail, and whiskers! One of the neat things about them is that they hunt animals much larger than themselves, like rabbits. They are too fast to get a good picture though. They were curious about us and got as close as 4 feet at times! They popped up out of the holes when we were hiking in the mountains and went back in, eventually leaving.

Pikas don’t hibernate. Instead, they run around under the snow, which is way warmer than above the snow because there is no wind and it is a smaller space that holds heat easier. Marmots, on the other hand, hibernate from September to May. We went on the trail during July and August, so we saw baby pikas and marmot pups, and watched them getting ready for the winter! We saw some pikas that were carrying grass to eat during the winter or to make a bed for themselves so they are warmer. We also saw marmot pups (not as small as they were during the early summer), eating as much as they could.

Hiking the Colorado Trail was much easier to hike with marmots and pikas to keep us entertained.