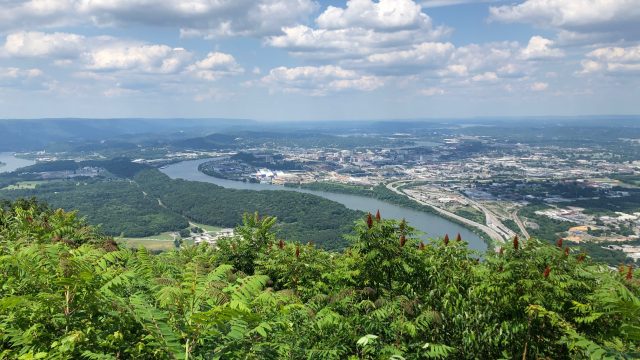 Wow! I saw to my left a green valley and to my right a busy city. As I stared out into the Tennessee Valley on top of Lookout Mountain, all I could think was what a fantastic city I lived near. The year was 2019, and I was in Point Park, a location in the Chickamauga and Chattanooga National Military Park (GA) and a unit of the National Park Service.

The day started with my family deciding we wanted to do the Junior Ranger program at the nearby National Military Park. The Junior Ranger booklets are available at two locations and contain questions from both sites. Our first stop was the Chickamauga Battlefield, where we first looked around the museum and saw a Civil War battery wagon and an extensive gun collection. Next, we watched a rifle demonstration where a park ranger in a Civil War uniform fired the rifle and explained how it worked. Afterward, the ranger told us some Chickamauga Battlefield ghost stories. Then we drove a short distance to the Wilder Tower Monument and walked the narrow stairs to the top, noticing the slitted windows on the way up. From the top, we could see far into the distance. My dad grew up near this park and rode his bike here as a kid, and my Grannie liked to go on drives and tell me about the area’s history from when she was little.

Our next stop was Point Park on Lookout Mountain. We drove up the side of the mountain on some snake-like roads high into the sky. We could see the city we had just left below us. When we arrived, we went into the museum in the visitor center, where we could see a giant wall painting of Major General Joseph Hooker on his white horse with other military officers. We left the museum, paid the fee to get into the park, and walked to the overlook. We could see the whole city from where we were. You can even see helicopters flying at your level. There is a tall monument called the New York Peace Monument, which lists all the New York regiments that fought on Lookout Mountain and their commanding officers. We took a short walk down to the Ochs Museum, where the park service has a display about hardtack. We learned about the hardtack supply lines through Chattanooga and why that was their name.

Finally, we returned to the Point Park visitor center and turned in our booklets to receive
our badges. Then, because we were the last people there, the ranger let us help her fold the
American Flag. We even got a Special Medal of Honor Junior Ranger badge. It was such a fun
day, and I learned so much. I encourage you to visit a park with military history soon!