Glacier National Park… Is it losing its Glaciers? 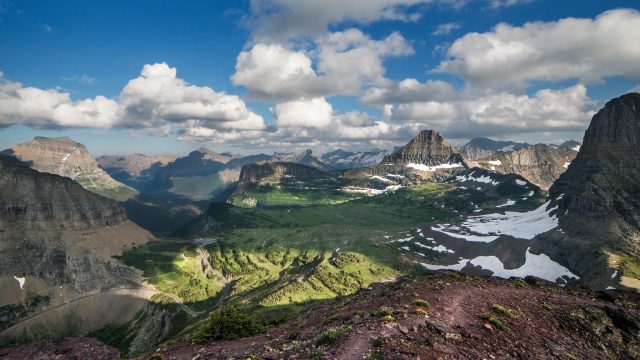 I still remember the immense rays of the sun following me all throughout the Highline trail in Glacier National Park (MT). I found it quite funny because we were hiking in the snow, while still sweating from the heat and at only 10 years old, it did not make sense why I would be sweating while I was so high up in the mountains, hiking in the snow. While we were hiking, it was around 92 degrees Fahrenheit, which is not normal for that elevation and our location (we were in the middle of glaciers). This was a very critical issue as we packed less
water than we thought we needed because we assumed the weather was going to be colder in certain areas even though it remained warm. This caused us to overconsume our water and dehydrate. This is a direct example of change caused by climate change. These types of hot days pose a threat to hikers across trails such as the Highline Trail as the glaciers usually are much colder and do not provide shade in this changing climate. Not only are hikers being affected by this change, but the glaciers in Glacier National Park have
been decreasing due to climate change.

Glacier National Park is one of America’s oldest National Parks as it is one of America’s original ten National Parks. When the park was first founded in 1910, it had over 100 glaciers. Now, because of melting caused by climate change, only a couple dozen are large enough to be known as “glaciers”. Even the remaining glaciers have undergone serious melting in the past 100 years. The named glaciers in the park have all shrunk and some have even gotten smaller by 80 percent. This is quite alarming and causes concern for the future of the ecosystem in Glacier National Park.

How is the Melting of the Glaciers Affecting the EcoSystem in the Park?
The changing climate’s effect on the glaciers has started to affect other aspects of the park as well. Many of the park’s animals such as mountain goats, wolverines, pikas, ptarmigans, harlequin ducks, black swifts, bull trouts, and meltwater stoneflies have all adapted to the cold temperatures and the shifting warmer temperatures put their populations at a risk. Also, many of the wildflowers in the park depend on the meltwater from the snowfields which is affected by the climate becoming warmer.

How is the Melting of the Glaciers Affecting Humans?
The park is a water source for many people within local areas and within the state. If the park keeps getting drier and hotter, the demand for water will increase which will soon diminish the water supply. This loss of a source will affect crops and water production.

What can be done?

Global warming has been happening for a while and will continue to grow. The park is trying to reduce its own carbon emissions by using solar arrays and hydropower, while also using energy-efficient LED lights. The park is also improving its recycling program as well as encouraging other forms of transportation. In
your own household, you can recycle, conserve water, and compost in order to be more climate-friendly. It is a group effort, and one that will be for the betterment of our planet, and ourselves!