My Half Dome Hike – I came, I saw, I conquered! 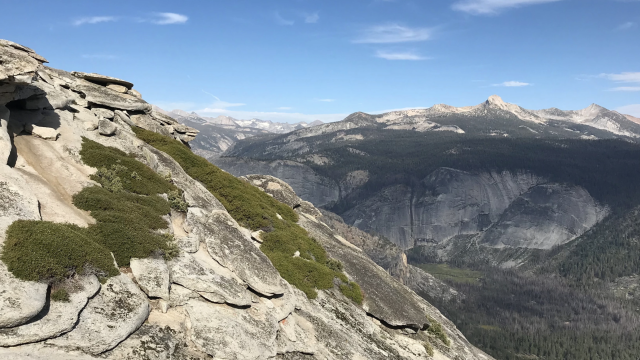 4000 ft to descend and it’s pitch black and late at night….
I shivered as I sensed a slimy feeling on the back of my thigh. My mind sent a warning throughout my body, and as I pointed my light at my leg, I became paralyzed with fear. A thick, black, centipede was crawling up my thigh, leaving a slimy trail behind. My whimper immediately alerted my mother who was quick to brush it off. As I kept walking in my soaking underwear, in the darkness of a National Park in my sleep, I knew it was going to be a tough hike ahead of me. It was getting later and later and every time I checked my watch, the time seemed to be working against me. It was pitch black outside with the only noises being my family’s shoes, the nightlife of Yosemite National Park (CA), and some distant waterfalls. I remember the first time when I set my eyes on what seemed like a big granite dome, which I was told was known as the Half Dome. Even though I was only 6, I was seeking some adventure and thrill in my life. As soon as I laid my eyes on it, I knew what my birthday wish was going to be. Every year after that I would torture my parents to go back to Yosemite so we could climb it. Finally, when I was turning ten we planned a trip back to the place where my burning passion for hiking and the “high” I realized I received from nature, first started.

15 hours Earlier
I remember vividly when I was awake in my hotel room the night before, wondering what the next day’s wonders were going to teach me. On the morning of the hike, my family woke up at 4:30 AM instead of our planned 3:00 AM wake-up time. What can I say, I guess the “Indian Standard Time” joke is true! We rushedly but also excitedly got into our new hiking clothes and boots my mom and dad had pristinely laid out the night before. We were all excited about what the hike was going to bring us, except maybe my older brother Eshaan who was quite annoyed we were not going to the beach instead. After a short drive from our
hotel to the trailhead, it hit me, we were finally going to climb this rock formation, after a relentless year of trying to obtain permits.

Vernal Falls
We began our hike slowly, adjusting our gear and backpacks while training our minds for the long beautiful, and exciting day ahead! Our trail started to elevate more and more with every step. Soon, we got to my least favorite part, the treacherous switchbacks. These switchbacks were not as strenuous because the heat of the sun was not adding extra weight to my body. I could hear the sounds of the water and feel the mist of Vernal Falls through the air. After a brief stop for pictures, we put our packs back on to face the rest of the hike. We had covered maybe 2-3 miles already.

Nevada Falls
After a couple of gorgeous, but tiring, miles ascending, we hit the steps. We were ascending directly next to the falls and we could feel every single drop of water rushing at our bodies through the soft breeze. There we again took a short break soaking in the scenic views while enjoying a short snack.

With the sun blazing on our heads, we hiked 6 miles with an ascent of about 1500 ft every mile. We ate our lunch when we were about 2 miles away from the Half Dome. Our lunch was just a couple of energy bars, fruit, and some energy bean chewable. My brother was complaining because he wanted Subway. By the way, that was very helpful Eshaan 🙂

Permit Zone/Subdome
After a long stretch through the mountains, we saw a permit table. That’s when my excitement kicked in and all my tiredness vanished. The park ranger checked our permits and my dad’s ongoing anxiety multiplied. We hiked up about 500 stairs and then saw the sub-dome. These stairs were narrow, steep, and very rocky. One wrong step coils you off the mountain. There were few spots where there were no steps and it was steep and you have to maneuver carefully and with extreme caution. Many people started to turn back saying they were going to throw up and were chickening out of it. I remember we sat down to wait for my mom to catch up and my brother and I were talking to a young couple who were eating their lunch and after coming all this way they were talking to us about turning back. This just made me want to climb it even more! We were confused at first because it looked like there was no way to climb the sub-dome. Then I remembered a couple of miles back my dad looking at the sub dome and saying he saw people climbing it. Then, my mom said that he was being silly and no one could climb something that steep and what he saw was a bunch of trees on the mountain swaying because of the wind. That turned out to be wrong. I could see the nervousness in my dad’s eyes as he was pouring with sweat. My family slowly climbed the sub-dome with chattering teeth. As for me, well, I quietly hiked up it.

Half Dome
Eshaan was so scared he was pretending his ankle was hurting to get out of it. He should have known that our mother was resilient and he would have no chance of getting out of it. The panic on my dad’s and brother’s faces was visible. Finally, my mom’s brave attitude shook everything out of them. I knew that we had no way of getting out of it as my mom is determined. After a few minutes of my brother’s impending drama, we finally reached the base of the Half Dome! We had to climb up the Half Dome using steel cables. There were two lines of steel rope hanging from the top of the dome which was almost vertical. We had to climb the half dome using those ropes with a harness for my brother and me and without one for my parents. I was so excited about this part and it was why I wanted to climb this formation in the first place. It was fun, scary, and thrilling at the same time.

With my mom in the front, my brother in the back, and my dad and me in the middle we were like a sandwich. In the middle of the cables, my mom decided to take a little break which gave us a heart attack as she was holding on to the rope at a steep angle. Once we got up there I was so tired and I fell asleep on a rock. Before I fell asleep though both my brother and I had peed our pants. Was it from the excitement or the thrill? My well-planned mother had packed extra clothes for us as she had predicted. We took many pictures and spent a good time walking around on the top of the half dome. The views are simply breathtaking and can only be experienced. As always, my daring mother went to the edge of the cliff and got her Facebook picture. We started heading down the cables and we all slowly climbed down the cables when we reached the base of the Half Dome….our faces beamed with a sense of accomplishment and after we took more pictures and said farewell to half dome, we headed back our descent. It was around 5:30 PM in the evening and we had a great deal to cover to reach the parking lot.

Heading Back
By the time we reached Nevada Falls, it was 9:30 PM at night. The animals had started to come out. Suddenly I turned to a crunch in the trees. A large brown bear was having a late-night snack. My brother was startled and quickly ran to my parents. I, on the other hand, have been waiting to see a bear the whole day! All the slimy creatures I see in my worst nightmares I knew were going to become reality. It was pitch dark and we had to descend 4000 ft and about 4 miles to cover in the midst of millions of spiders, scorpions, tarantulas, garter snakes, and extremely steep and narrow mountains. At About 10:00 PM I peed my pants
for the second time. What to do now? It was pitch black and I did not have another change of clothes. I stripped my shorts off quickly and just walked in my wet smelly underwear for the next 3 hours…….. It was pitch black outside. I was walking in my wet underwear and I could not feel my legs At this point, my parents decided to avoid Nevada falls since it might be too slippery and risky to climb down the pitch darkness. That would add another 2 miles using the John Muir Trail.

After nearly 18 hours of hiking, we finally hit the road. The family bonding in the last few hours was something I would cherish for a lifetime. It gave us all a feeling that we are all lucky to have each other. It was not over yet though. There were no more shuttles this late at night and our car was parked far away! My dad got ready for the long walk as the rest of us settled on a rock. I was so tired sitting in my wet underwear in the cool breeze draining my mom’s battery watching Fuller House. Finally around 1:00AM I saw our car. Once we returned to the hotel room I did my usual drama and got into the shower first!

Each one of us plays an important role in each other’s life. All the long and strenuous hikes we did over the years tell me that we work as a team, back each other up, and are together in all situations and difficult conditions. This is a life-learning experience for all of us. Challenges are meant to be overcome with the right amount of effort and dedication.

The Half Dome, I have conquered you!