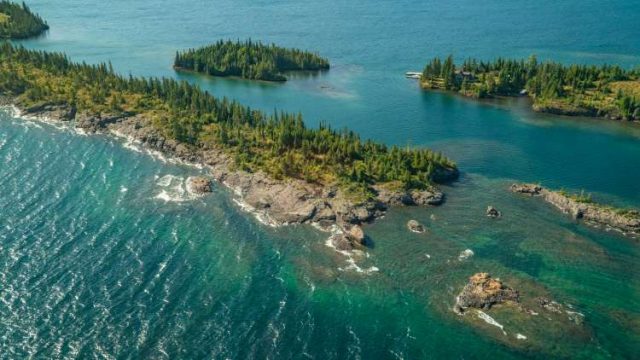 In Minnesota, there is an area called the North Shore that I visit once or twice a year. The North Shore refers is the 154-mile shoreline along Lake Superior in Minnesota from Duluth to Grand Portage. There are so many places to visit in that area.

Here are a few spots that Buddy and I visited in July:

Grand Portage National Monument
Step back into history and relive the partnership of the Grand Portage Ojibwe and the North West Company during the early North American fur trade.

The area features a replica of the trading post that operated between 1731 and 1804. The replica includes a great hall, kitchen, and canoe warehouse. We were greeted by a reenactor at each building, who was performing activities such as canoe building. Buddy and I were amazed at the size of some of the handmade canoes! I hope to visit the monument next year during the second week of August, which is when the annual Rendezvous Days and Traditional Pow Wow are held. There will be music, dancing, and workshops, and much more!

Grand Portage State Park
This is about as close as you can get to Canada without stepping over the border. The park is located on the Ojibwe reservation. This is the only Minnesota state park located within an Indian Reservation that is on land owned by the Tribe. There are two falls in the park, the Middle Falls and High Falls of the Pigeon River. The river separates the United States and Canada. The highlight of this park is the 120-foot-tall High Falls. This is the highest waterfall in Minnesota, but only a portion of the falls are located within the state. If you want to see the highest falls that are located totally inside of Minnesota you will need to go to Tettegoache State Park, which is also located along the North Shore. Buddy and I followed the ½-mile trail and boardwalk to see the 120-foot-tall High Falls and were glad we did! It was impressive.

Next time we visit this park, I want to challenge Buddy to take the 5-mile round-trip hike to the Middle Falls. According to the Minnesota Department of Natural Resources web site, that hike is rugged and has elevations changes of several hundred feet. Most people take three hours to complete the hike.

Gooseberry Falls State Park
There are five waterfalls in this park including the upper, middle, and lower falls of the Gooseberry River. This park is a very popular tourist attraction so when we visit, we plan to arrive either right when the park opens at 8 a.m. or after 5:30 pm (the park closes at 10 pm).

There are 18 miles of year-round trails, so each time we visit we find a new trail to take. This time we took a trail to the Fifth Falls, which is the smallest waterfall in the park. It is the least visited of the park’s falls, so we had that area to ourselves.

A great place to take a photo inside this park is by the 300-foot long highway concourse and retraining wall that is called the “Castle in the Park”. It earned that name because it looks like a castle wall from a fairy tale. The wall was built by the Civilian Conservations Corps (CCC) from 1936 until 1940. The CCC had many projects inside the park. Here is a link to a self-guided tour map of projects CCC built inside the park:
http://files.dnr.state.mn.us/destinations/state_parks/gooseberry_falls/ccc_checklist.pdf
Next time we visit this park, I am bringing my bike. I want to ride on the Gitchi-Gami State Trail through the park. I just need to find a helmet that fits Buddy!

Iona’s Beach
You own a what?
No, I don’t own a beach. I am talking about Iona’s Beach near Two Harbors, Minnesota.
Iona’s Beach is one of those places my family loves to visit because we are usually the only people there. Sometimes another family is there at the same time, but there is plenty of room along the 300 yards of beach so we still feel like we have the place to ourselves.

The beach is filled with pink rocks that are made of rhyolite. They are beautiful to look at, but Buddy wants to remind visitors not to take any home.

The beach is named after Iona Lind. She had a resort on the land, but that’s gone now and just nature remains. The land was donated to the State of Minnesota, and it has been designated as a Scientific and Natural Area (SNA).

Being designated as an SNA means that the land is open to the public for recreational activities that do not disturb the land, plants, or animals. Examples of allowed activities include birdwatching, photography, and hiking.