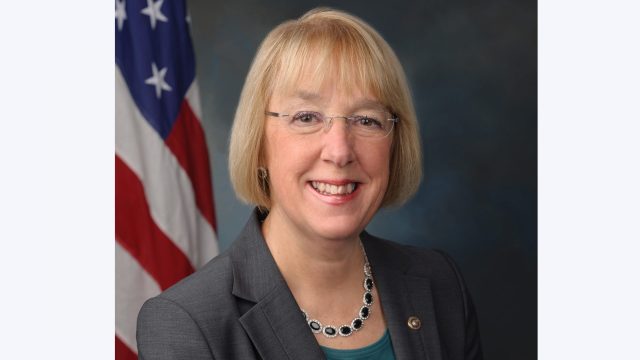 Washington, D.C. (April 6, 2021) – National Park Trust is pleased to announce that Senator Patty Murray received the 21st Bruce F. Vento Public Service Award. Due to the impact of COVID-19, Senator Murray was honored on June 24 at a virtual event.

Senator Murray was recognized for her extraordinary work to protect our parks, public lands, and natural resources. Over her career, she has sponsored 20 bills to protect the environment, including several resulting in the creation of more than 1 million acres of federal wilderness. Through her efforts, 95% of Olympic National Park was designated as the Daniel J. Evans Wilderness. She was chief architect of the 106,577-acre Wild Sky Wilderness in eastern Snohomish County, created to protect forests and salmon spawning streams, and in 2014, Senator Murray worked to get 23,000 acres of land in King County added to the Alpine Lakes Wilderness Area. Her unwavering dedication to permanent and full funding of the Land and Water Conservation Fund ensures the protection of America’s special places and will provide enjoyable visits for generations of families to our nation’s public lands.

In 1992, Senator Murray became the first woman from Washington state elected to the U.S. Senate. Senator Murray currently serves as the Chair of the Senate Committee on Health, Education, Labor & Pension and as a senior member of the Senate Appropriations, Veterans’ Affairs, and Budget committees. Senator Murray’s experiences as a preschool teacher, school board member, and state lawmaker have shaped her legislative interests in Congress and her advocacy for Washington state families.

“I’m honored to be receiving this award, and I will continue working in the Senate to keep our air and water clean and ensure that future generations can continue to enjoy Washington state’s natural beauty and wild spaces, which mean so much to me and to families and communities across our state,” Senator Murray said.

“We look forward to recognizing Senator Patty Murray for her nearly two decades of service to support bi-partisan legislation and programs that preserve our public lands and waters as well as her work to support the health and wellbeing of children and families,” stated National Park Trust Board Chair Bill Brownell.

National Park Trust established the Vento Award in 2001 to honor the memory and legacy of Bruce F. Vento, a twelve-term Congressman from Minnesota, dedicated environmentalist, and a champion of legislation for America’s parks. The award honors a public servant for his or her commitment to the environment, and their service, skill, and innovation in support of our public lands and waters.