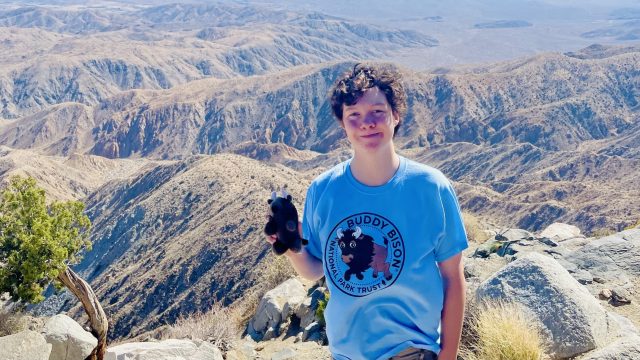 Robbie Bond is the Founder of Kids Speak for Parks which was launched in July 2017. Now 13-years-old, Robbie grew up on the island of Oahu in Hawai’i and has always had a passion for the environment and the protection of our nation’s natural wonders. Robbie created Kids Speak for Parks to ensure that our parks and monuments will remain protected long into the future.

Robbie is committed to ensuring his peers across the country learn to understand and appreciate how truly vital national parks and monuments are to our country and why they should be preserved for future generations. His organization engages kids by speaking at local schools and Robbie raises awareness of National Parks by trying to visit every one of them and bringing other kids along through the videos he makes of his visits. He’s now also developing a VR-based curriculum for America’s schools so that kids all over the country can experience the beauty of National Parks and advocate on their behalf.

Robbie is grateful for the many awards and opportunities that have amplified his efforts, including the Gloria Barron Prize for Young Heroes, Diana Award, Action for Nature Eco-Hero, Captain Planet Young Hero For Earth. In addition to being a National Park Trust Student Ambassador, Robbie is A Delta Airlines Green up Youth Advisory Board member, Google Expeditions partner,  and international youth ambassador for Litterati, Robbie has an episode of Marvel’s Hero Project “Roving Robbie” now streaming on Disney +.

Over the holidays I got an adorable puppy named Pippa and I want to make sure that we visit parks responsibly together.